The management of visits to the Palazzo d’Avalos in Procida (ex prison) is entirely organized by the “Palazzo d’Avalos” Association of the same name.

Cost of entry to the Palace:

Visiting hours at the Palazzo d’Avalos vary according to the season, weather conditions and restrictions due to the COVID emergency.

In general, visits are concentrated in the morning, during the week only with a guide and by appointment. 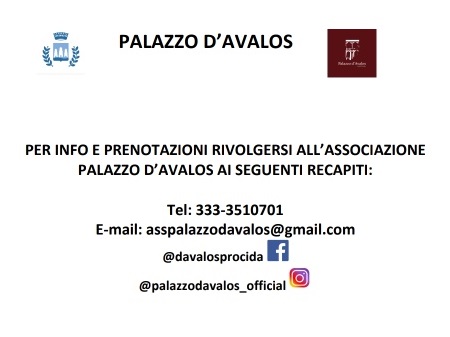 The August appointment at dawn at the Palazzo d’Avalos is highly anticipated every year: a special guided tour with breakfast waiting for dawn on the roof of the ex prison.

Where is the Palazzo d’Avalos

The exact address of the former Procida prison is Via Salita Castello, 25, 80079 Procida NA

Look for it on Google Maps

The Royal Palace
The highest point of the island of Procida is the promontory of Terra Murata (91 meters above sea level) which owes its name to the imposing structure of the Palazzo d’Avalos.
As also mentioned in Elsa Morante’s novel, Procida in the 16th century was a fiefdom of the d’Avalos family and in 1529 they decided to build the Palace.
The structure was initially born as a place for recreation mainly used by the sovereign as a setting for hunting parties.
Only relatively recently, around 1831, with King Frederick II, the Palace was used as a prison.
From Royal Palace to prison
Unfortunately, in the conversion from the Royal Palace to a prison, the structure lost frescoes, floors and many arcades, to make room for cells, isolation rooms and common areas. The major changes are internal: the large halls divided into smaller rooms, cutting the characteristic round arches in half, which influenced the architecture of the houses in Procida.
Of the original Royal Palace, the courtyard with the well and the facade in piperno, a rock of volcanic origin, remain unaltered.
The Procida prison remained in operation from 1831 to 1988. During these years there have also been well-known personalities among the inmates hosted by the prison, among these the most striking case is certainly Romolo Tranquilli, brother of the writer Ignazio Silone (pseudonym of Secondino Tranquilli) , who died innocent in the Procidan prison.
Current structure of the prison
The prison is divided into five sections. Only in one were the cells used as singles, in all the others there could be up to 40 inmates inside.

Very suggestive are the gratings of the windows that directly overlook the sea, as if to widen the feeling of punishment: being able to admire the beauty, but not being able to live it fully.

Equally impressive is the medical office with a rudimentary operating table that apparently looks like a place of torture, but where many lives were saved.

There are no reviews yet.

Be the first to review “Guided tour of the Palazzo d’Avalos,ex Procida prison” Cancel reply

Book and rent the best of local experiences in just a few clicks. We periodically propose new activities to do on the island of Procida. Follow us on social networks and on Telegram to stay up to date!

Where to find us